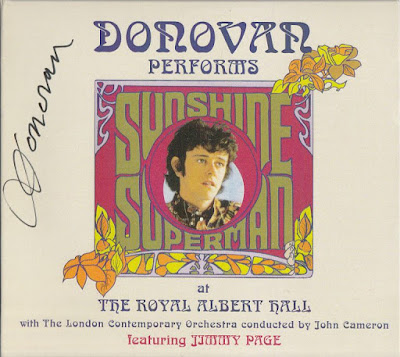 This double DVD set is packaged in a CD-sized card sleeve and looks to be the product of a busy cottage industry which sells merchandise from Donovan’s base in Ireland.  I say “cottage industry” because, although nicely designed, these appear to be the kind of blue discs you’d copy at home. I guess that’s the way it works with small production runs from independent record labels these days.  On the plus side, early adopters received their copies hand-signed by the man himself.
Filmed at London’s Royal Albert Hall in June 2011, but held back until 2016 (presumably to tie-in with the 50th anniversary) what we have here is the full US version of the Sunshine Superman album, plus extras, performed live with a full orchestra, backing singers and a rock band including a handful of big-name guests.  The London Contemporary Orchestra is conducted by Don’s long-time arranger John Cameron. The pair have worked together on and off since 1965 and Cameron was responsible for the wonderfully innovative keyboard, string and brass arrangements on those classic psych pop albums Donovan recorded between 1966-68.
Introduced by his daughter Astrella Celeste, Donovan takes the stage looking great for a man of 65, as he was in 2011.  Dressed in a flowery shirt and velvet tunic and still with that luxurious head of hair intact, he launches into a potted history of “my album” Sunshine Superman.  Almost unbelievably, recording for that record started with the title track in late 1965.  Imagine that! Maybe Donovan did invent psychedelia after all.
Presenting the album in the original track order, Don floors the RAH audience by bringing on Jimmy Page right off the bat for the opening number.  Dressed entirely in black with his snow-white hair tied back, Page straps on a three pick-up black Gibson Les Paul and, grinning hugely, peels off that oh-so familiar “Sunshine Superman” guitar motif.  As a virtually unknown session man he played on the original hit single half a century ago along with bassist John Paul Jones who, sadly, is not here tonight. Page is on great, if typically sloppy, form and he and Don share a big hug as he leaves the stage after just the one song. 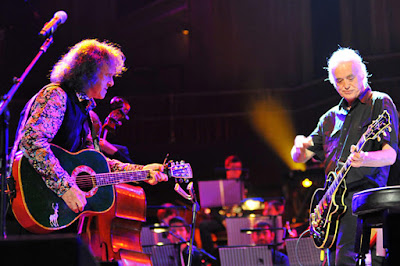 The band and orchestra sound magnificent, but Donovan’s voice seems strained and on the quiet, acoustic songs like “Legend Of A Girl Child Linda” he struggles to make some of the high notes.  The song is simply a succession of identical word-heavy verses, but John Cameron’s complex orchestral arrangement builds layer on layer to maintain interest until the end. Astrella also sings background on some verses.
It’s not often you see a sitar played in anger these days but step forward Don’s old mate Shawn Phillips for “Three Kingfishers” and “Ferris Wheel”.  Phillips contributed 12-string guitar and sitar to the very early Donovan albums, including Sunshine Superman and he still cuts an imposing figure with his gaunt, chiselled visage and waist length hair worn in a ponytail.  A multi-instrumentalist, Phillips also doubles on electric guitar during the concert, playing a frankly bizarre twin-neck instrument which is half Gibson Les Paul and half Fender Stratocaster.
"Bert’s Blues", one of several Donovan songs inspired by Bert Jansch, starts off acoustically and builds to mighty jazz swing climax with another fine orchestral arrangement from Cameron, who also plays harpsichord.  A veteran of many early Donovan albums, the venerable Danny Thompson is present on “concert bass” (that’s double bass to you) throughout. “Season of the Witch” is possibly Don’s most covered song with countless versions over the decades.  Seldom have two chords worked so well together to produce such a mighty song and tonight “SOTW” is delivered in its original lazy funk arrangement with some impressive guitar from LCO member Tom Ellis and a massive string finale.
A surprise guest arrives to throw some shapes and duet on “The Trip”.  Turns out it’s Don’s son Donovan Leitch Jr, a tall, handsome young man in designer specs who looks like he’d be more at home spinning discs in a nightclub than singing his dad’s hippy dippy lyrics.
Shawn Phillips steps up again to play sitar on “Guinevere”.  Don relates the story of jamming at Phillips’ Marble Arch flat in 1965 and recalls how they came up with “The Fat Angel” (written for Mama Cass, fact fans).  Again, the string arrangements are exquisite on these two songs.
The last song on Sunshine Superman is the gentle, anthemic “Celeste” and it brings the first part of the concert to a close.  Dedicated to his mother-in-law Violetta who is sitting “up in box number 40” “Celeste” rolls along on a heavenly wave of strings and brass.
After some effusive and extended band introductions, there follows a quite extraordinary encore version of “Atlantis”.  Don’s voice has loosened up a little now and the spoken intro is delivered with impressive gravitas, easily as good as the original single.  There must be 50 people on stage at this point and all of them seem to be playing at once during the “Way down below the ocean” extended coda.  Jimmy Page then returns for a reprise of “Sunshine Superman” with full orchestra and a singalong “Mellow Yellow”.
Disc 2 is a condensed eight song presentation of the first half of the show featuring most of the big hits, including “Catch the Wind”, “Jennifer Juniper”, “Hurdy Gurdy Man” and others.  These are, if anything, even more impressive and enjoyable than the main part of the programme. Donovan’s voice is in better shape than on the Sunshine Superman material and the band is right on the money, especially Tom Ellis who perfectly reproduces the heavy guitar parts on “Hurdy Gurdy Man”.  Sadly, Jeff Beck didn’t show up to reprise his performance on “Barabajagal” but that was the only thing missing from a magical night at the Albert Hall.  Ellis has Beck’s parts down pat anyway.
Given the amount of people involved and the rehearsal time required, it must have cost an absolute fortune to present this show, which is probably why Donovan didn’t tour the world with it. 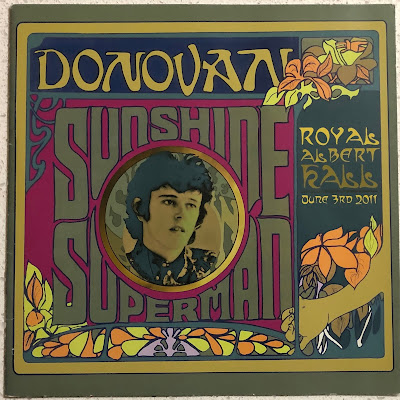 Donovan Performs Sunshine Superman At The Royal Albert Hall is available from here
at November 15, 2019

Email ThisBlogThis!Share to TwitterShare to FacebookShare to Pinterest
Labels: Donovan