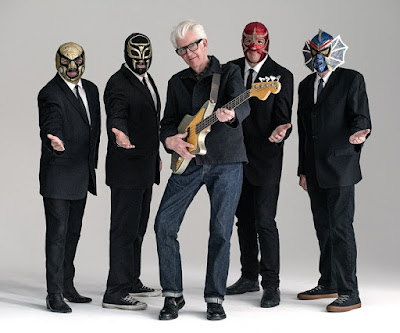 Who were those masked men?  Why, they were Los Straitjackets, of course.  The Nashville-based quartet are the hottest rock & roll outfit you’re likely to encounter and tonight they were in Perth backing the legendary Nick Lowe.
As pedigrees go, Nick's is both impressive and impeccable.  He was right there at the birth of pub rock with his late 60s bands Kippington Lodge and Brinsley Schwarz.  As staff producer with Stiff Records he was at punk ground zero and his 1976 single “So It Goes” was the first release on the famous label (catalogue number Stiff BUY 1, fact fans).  At the same time he worked extensively with Dave Edmunds, both in the illustrious Rockpile and on their respective solo albums, enjoying much chart success in the 70s and 80s. 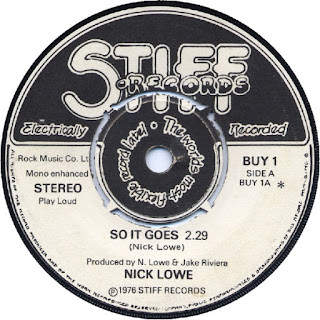 In 1991 Nick formed Little Village with the dream ticket line-up of Ry Cooder, John Hiatt and Jim Keltner.  The reality didn’t live up to the promise, unfortunately, and Little Village folded after a year and just one studio album.  Concert tapes confirm they were a live band to be reckoned with, however.
In recent years he has continued to turn out hook-laden solo albums of the highest quality, with the occasional lovingly crafted gem such as The Old Magic (2011) as good as anything he has ever recorded.  Now aged 70, Lowe could hardly look less like a rock star.  But don’t let appearances fool you. Beneath the snow-white hair and Buddy Holly specs lurks a consummate stage performer and Los Straitjackets seem to have re-ignited his love of rock & roll.  I confidently expected to see a family friendly cross-section of old hits and a few newer songs tonight at the Astor. But I hadn’t bargained for the strange and wonderful high octane show we actually got. 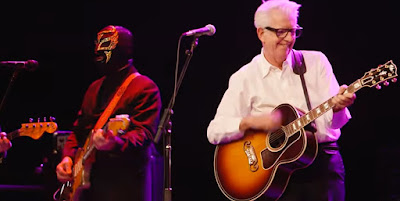 The first surprise was the masks.  Every member of Los Straitjackets wears identical black suits, gold Aztec medallions, and personalised Mexican wrestling masks.  Your initial instinct is to laugh, but the power and personality of the music soon takes over.
The band has been around in one form or other for decades and have 14 albums to their name.  Their association with Nick began in 2017 when they recorded an instrumental album of his songs (What’s So Funny About Peace, Love And Los Straitjackets) and this led to them becoming his backing group in 2019.  The fact that they share the same manager (Jake Guralnick) and record company (Yep Roc) made it easy for them to team up when Nick needed a touring band. 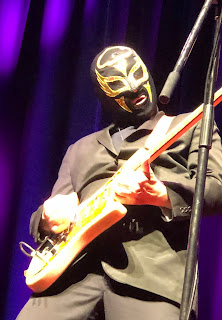 Fronted by lead guitarist Eddie Angel, Los Straitjackets are essentially a rockabilly/surf guitar group, but this is a hot band who can play any style with ease.  Their matching silver sparkle DiPinto Galaxie guitars are modern instruments, yet they ooze 50s pawnshop aesthetics and complete the retro surf band look perfectly. Nick, meanwhile, sticks with his upmarket Gibson J200 acoustic, his guitar of choice for several years now.
Appropriately enough they kick off with “So It Goes”, that aforementioned Stiff label launch single and the perfect pop song to open the show.  It soon becomes apparent that this is no bunch of hired hands supporting the star. Together they are a real band with great chemistry and Los Straitjackets inject their own personality into the material, giving it a new lease of life.  Nick is clearly having a great time, too.
“Ragin’ Eyes” is followed by “Without Love” from possibly his best-known solo record, 1979’s Labour Of Lust.  The tongue twister “Shting-Shtang” is next up, before the first new song of the evening arrives.  It’s a cover of Sammy Turner’s 1961 “Raincoat In The River” which is featured on the recent Love Starvation EP.  “I’ve also been in the audience as a concert-goer and I think there are few drearier words in the English language than ‘we’d like to do one from our new album’” deadpans Nick, to much laughter.  “But all our tunes are only about two-and-a-half minutes long and all the new stuff sounds exactly like the old stuff.” Following another recent number, the up tempo “Tokyo Bay”, he turns the stage over to Los Straitjackets for their own short solo bracket. 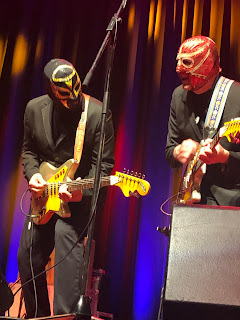 The masked quartet ham it up unashamedly on a selection of surf guitar instrumentals, including a goofy Ventures-style version of Australia’s undisputed greatest-ever pop song (© all music magazines, forever) the Easybeats’ “Friday On My Mind”.  Nick returns, in a different shirt, just in time to sing the last verse of an otherwise instrumental version of “I Love The Sound Of Breaking Glass” and the second half gets underway.
The always wonderful “Half A Boy And Half A Man” leads into two more new songs, “Blue On Blue” and the title track from the Love Starvation EP.  Then Nick delivers his second cover version of the night, a joyous romp through Brenda Lee’s 1962 hit “Here Comes That Feeling”.  Two more cuts from Jesus Of Cool follow: the poptastic “Cruel To Be Kind” and the punky “Heart Of The City”, before the main part of the set ends with everyone's favourite wedding disco song “I Knew The Bride (When She Used To Rock 'n' Roll)”. 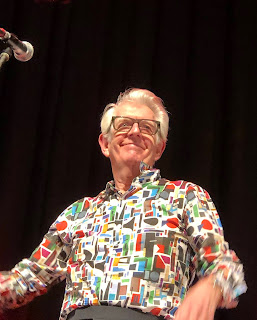 Los Straitjackets lead off the encore with an entertaining instrumental version of the Trashmen’s “Surfin’ Bird” featuring some first-class lunacy from drummer “Gringo Starr” (aka Chris Sprague) which includes gargling into the microphone and other tomfoolery.  Then Nick takes it home with Rockpile’s “When I Write The Book” and the ageless "(What's So Funny 'Bout) Peace, Love, and Understanding”.  Lest we forget, this last song dates from 1974 and the final studio album by Brinsley Schwarz.  It has since become a modern classic with a multitude of cover versions by a range of artists including, notably, Elvis Costello.  This is the song which provided Nick with his biggest payday when, in 1992, it was sung by Curtis Stigers in The Bodyguard movie.  Worldwide sales of the soundtrack album currently exceed 45 million. 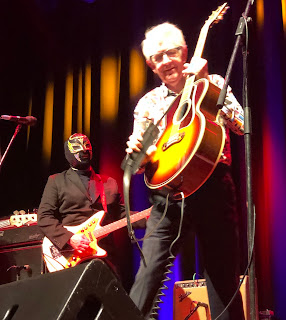 Amid much stomping, cheering and even a little whooping, Nick returns for a second encore and delivers a superb solo acoustic version of Elvis Costello’s “Alison”, which was a clever twist on the previous song.  Lowe produced the 1977 debut Costello album My Aim Is True, where “Alison” originated, so there could not have been a more fitting end to the evening.
Earlier, Nick had praised the beautiful art deco venue, saying "You're so lucky to have a place like this. In London we have nothing of this size anymore. It's either the O2 (stadium) or a room above the Dog & Duck (pub)". Sadly, the Astor (capacity 1,100) was only half-full as the upper balcony section was closed, presumably through lack of sales.  Nick and Los Straitjackets have been selling out venues of this size all over America so well done to those who turned out, but perhaps Perth should feel a little ashamed tonight.  After all, as the posters quite rightly said, it was a “Quality Rock & Roll Revue” and we don’t see too many of those anymore.
Support was provided by Jim Lauderdale.  Almost as well travelled as Nick Lowe, Jim has written and recorded with Buddy Miller, Robert Hunter, Dr. Ralph Stanley and Nick himself.  His songs have been recorded by dozens of artists, notably George Strait, Gary Allan, Elvis Costello, Blake Shelton, the Dixie Chicks, Vince Gill, and Patty Loveless.  Since 1986 he has released (it says here) 31 studio albums.
Whether you call it country or Americana, Jim's short set was a joy, aided by his strong voice and engaging stage persona.  It could have been helped by another couple of instruments, perhaps, instead of just his lonesome (not to say rudimentary) guitar.  But you can’t have everything. 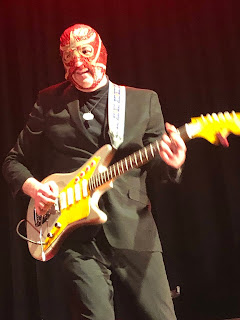 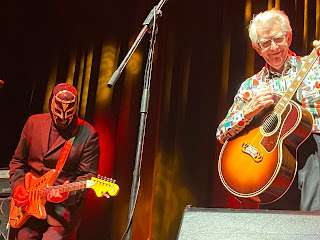 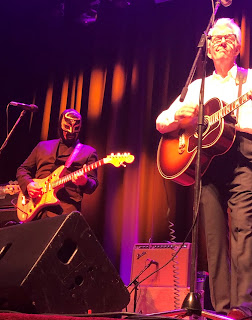 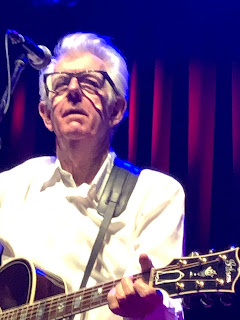 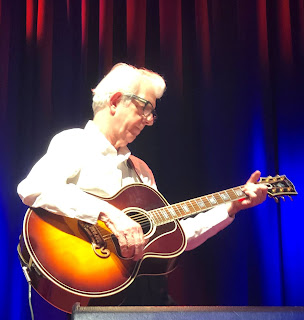 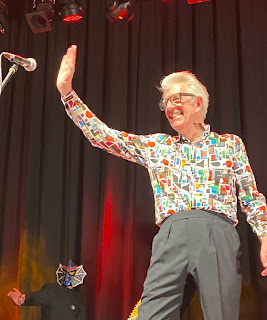 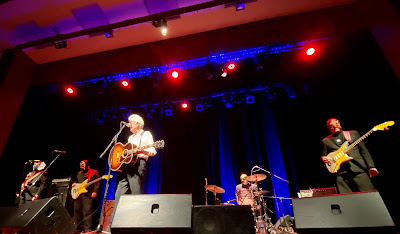