Overpaid, Oversexed and Over There: How a Few Skinny Brits with Bad Teeth Rocked America 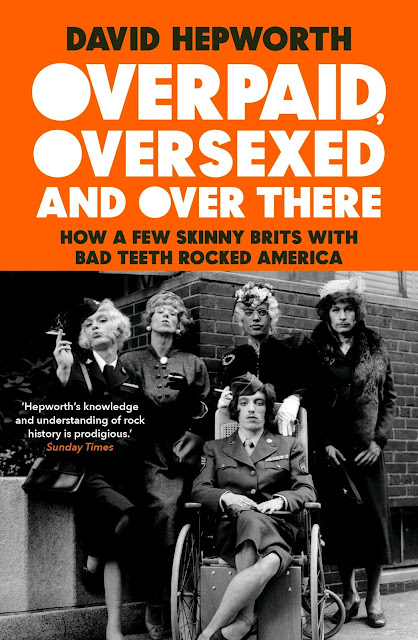 This is David Hepworth’s fifth full-length book in just five years.  That’s pretty good going by anyone’s standards, but then Hepworth has had plenty of practice.  He’s been writing about music for almost half a century and was intimately involved with seminal UK magazines such as Smash Hits, Q, Mojo and The Word.  Since leaving the world of print media in 2012 a lifetime of anecdotes, reminiscences and, most of all, opinions have been unleashed, resulting in a string of highly entertaining books.

Did I say opinions?  Oh yes, Hepworth has opinions aplenty and he’s not afraid to share them.  Old heads will nod sagely when he tells us that the best-ever year for rock music was 1971 or that, despite their unprecedented global fame, the Beatles were, in fact, underrated, just to give two memorable examples from his earlier writing.  These kinds of assertions do seem to annoy and alienate some readers, however, and their validity is often called into question on social media and online music forums.  Thankfully, Hepworth’s sweeping views are invariably backed up with rock solid research and often bolstered by first-hand experience of the material under discussion.

Hepworth and I are almost exactly the same age, both born in Yorkshire within a few weeks of each other in the summer of 1950.  So, it’s no surprise we tend to agree on many things musical, within reason.  I don’t share David’s unconditional love of Bruce Springsteen, country rock and the Doobie Brothers perhaps, but otherwise I’ve found little to argue with in any of his writing.

Fans of Hepworth’s work will be pleased to learn this new one carries the same trademark of quality (TMOQ, geddit?) as his earlier books, albeit with a slight twist.  This time the theme is the British Invasion of America, which began in 1964 and continued virtually unabated until the internet made the world a smaller and less parochial place in the 80s.

George Bernard Shaw famously noted that Britain and the US are “two nations separated by a common language”.  By the time GBS shuffled off in 1950 the gap had widened much further and Hepworth forensically examines the post-war idiosyncrasies and disparities of our two countries insofar as they relate to popular culture in general and pop music in particular.

Many of the themes and anecdotes here will be familiar to scholars of what we now call classic rock, but Hepworth’s razor-sharp turn of phrase (honed at the Q magazine university of witty, understated prose, no doubt) and amusingly cynical writing style injects vitality into well-worn tales and the pace seldom flags throughout the 330-odd pages.

The book’s title is a twist on a wartime saying applied to the comparatively affluent US servicemen based in Britain, dubbing them “Overpaid, Oversexed and Over Here”.  Hepworth also cheekily shoehorns another WWII wisecrack “One Yank and they’re off” into the opening chapters.  This is a Carry On-style reference to the expensive silk undergarments which the GIs gifted to the local British girls, and it perfectly sums up the economic status of our two countries at the time.

Like many of the best things in life it all began with the Beatles.  Their February 1964 appearance on the Ed Sullivan Show and the subsequent film A Hard Day’s Night caused American teenage girls to swoon en masse and inspired a generation of US boys to grow their hair and take up the electric guitar.  Some of the boys who fell under the Fab Four's spell are still household names today (Springsteen, Tom Petty, Roger McGuinn et al).  Best of all, though, Hepworth maintains it was the Beatles who introduced the concept of “the group” to America, displacing all those solo pop crooners, many of who appeared to be called “Bobby” (Darin, Vinton, Vee, Rydell etc).

After the Fabs had laid waste to their charts, America simply couldn’t get enough British music and even groups who were only middling successes at home (Chad & Jeremy, Dave Clark Five, Herman’s Hermits etc) found massive fame in the States, shifting many times more records there than in their homeland.  Even today, a dewy-eyed Springsteen will wax lyrical about the DC5 at every opportunity while Brits, especially those who were around at the time, tend to scratch their heads in puzzlement at such enthusiasm from The Boss.  Hepworth then goes on to suggest a direct link from the Dave Clark Five to 80s glam metal rockers Kiss.  It seems rather a long bow to draw at this distance, unless we’re comparing simplistic barrack room drumbeats, but there you go.

The British blues boom of the late 60s re-introduced America to its own ethnic music via the supercharged guitar music of Eric Clapton and Jeff Beck.  They were closely followed by Led Zeppelin, Deep Purple and Black Sabbath as the UK heavy contingent crossed the Atlantic to invent stadium rock.

One notable failure was Nick Lowe’s country rock band Brinsley Schwartz, whose overhyped US visit in April 1970 was an unmitigated and expensive disaster.  David Bowie, Rod Stewart and Elton John did rather better Stateside, with Rod taking up permanent residence there following the hugely successful and aptly named Atlantic Crossing album.

Punk rock was a different matter entirely, however.  America’s idea of punk didn’t extend much beyond Blondie and Talking Heads and while Britain embraced the Ramones warmly, they were seen as little more than a joke at home.  As Hepworth points out, the USA is much more than one country both geographically and culturally and the sheer scale of the place means that bands who might do well on the coasts invariably don’t amount to much in the vast hinterland of middle America.  Consequently, although huge in Britain, outfits such as the Sex Pistols and the Boomtown Rats died a painful death outside the fashionable hotspots of New York and LA.  Meanwhile, the Clash and the Police were prepared to put in the hard slog and both enjoyed a string of US hits, with London Calling seemingly tailor-made to win over American hearts and minds.

The book ends with Boy George, who scored several early 80s American hits with Culture Club.  George is a savvy media operator and has a cheeky line for every occasion.  When a US talk show host suggested his cross-dressing might be poisoning the minds of American youth, George fired back “In the country of Liberace, I’m hardly revolutionary”.

The 80s arrival of home-grown US stars such as Madonna, Prince and Springsteen, together with the rise of MTV and, most importantly of all, the burgeoning digital revolution, conspired to bring the 20 year-long British Invasion of America to an end.  It was a pivotal time in music, but technology has ensured it could never happen in quite the same way again.  This book brings those two important decades to life and places the reader right there in the thick of it.  Those old enough to remember will enjoy nostalgic rushes galore, while younger readers will gain an invaluable history lesson.

Come Taste The Band! Memories Of The Incredible String Band Plus - All Their Original Albums, Ranked!

by Stuart Penney “OK, here’s the album with the trippiest cover.  Colour’s all over the place on this one, a real eye dazzler.  Probably exe... 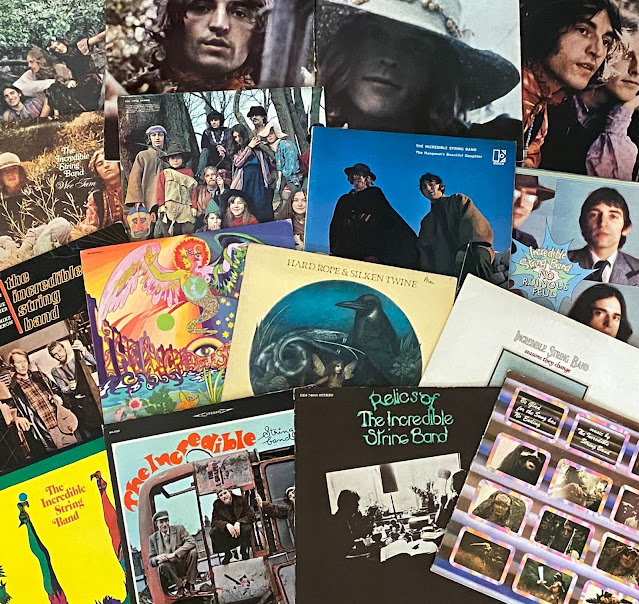 Dip Your Toes In Here