The Ones That Got Away: Near Misses With Rare Records 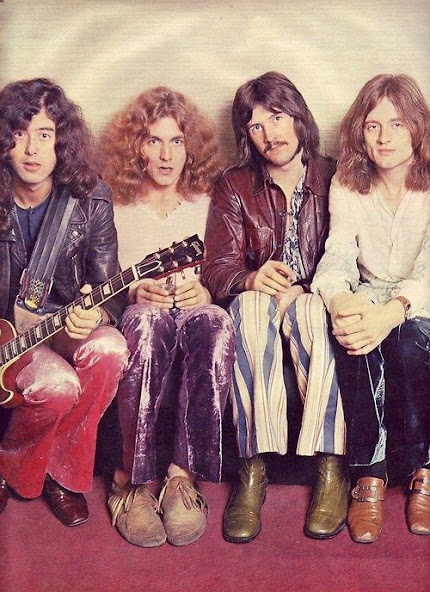 From the moment their debut album arrived in early 1969 Led Zeppelin did things entirely on their own terms.  They broke every rule in the book and along the way changed the music industry perception of how a rock band should operate.  Most unusually for the time, Zeppelin did very few TV appearances or press interviews, preferring to let their huge grossing American tours and mammoth live shows do their talking for them.  But perhaps the most radical business decision of all was their strict “no singles” policy.  LZ saw themselves as a serious albums band and wanted absolutely nothing to do with the fripperies of hit singles or teenybopper chart programmes such as Top of the Pops or American Bandstand.  This “no singles” clause was even written into the band’s contract with Atlantic records. 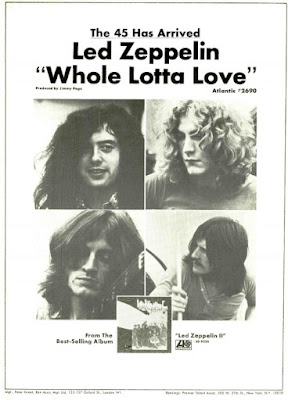 Of course, hit singles in America stimulated album sales and without them the band would receive little or no AM radio exposure, which was seen as a vital promotional tool back then.  But Zeppelin were already selling truckloads of albums, so what did they care for such distractions?  Even so, it was obvious to all what the potential breakout single was on their second album Led Zeppelin II.  It was “Whole Lotta Love”.  At 5:33 it was much too long for AM radio play, but with the orgasmic middle section removed it came down to a more manageable 3:12, which seemed perfect.  Atlantic’s promotion department begged Zeppelin’s fearsome manager Peter Grant to allow them to issue an edited version of “Whole Lotta Love” as a single, but Jimmy Page flatly refused, and their pleas went unanswered.  “No singles!” reiterated Grant.

Ultimately Jerry L. Greenberg, then Atlantic’s US head of promotion (and later the label president), created his own three-minute edit of “Whole Lotta Love” which was sent to Jimmy Page for approval.  Page finally caved in and authorised the radio edit for release.  Greenberg pressed up 2,000 promo copies with the three-minute edit on one side and the full-length version on the other and sent them to radio stations across the USA.  As Greenberg had predicted the airwaves exploded and the “Whole Lotta Love” edit was swiftly given a commercial US only* release with “Living Loving Maid (She’s Just A Woman)” on the B-side. Released on November 7, 1969, the record eventually peaked at #4 in the Billboard Hot 100 chart, becoming Zeppelin's only US top 10 single.

Meanwhile, over in London, Atlantic's UK label manager Phil Carson saw this as a green light to issue “Whole Lotta Love”/“Living Loving Maid (She’s Just A Woman)” as a single in Britain and pressed a batch of between 500 and 4,000 copies (estimates vary), which were sent out to radio stations and record wholesalers in December 1969.  When Peter Grant heard about this he was less than pleased. He called Carson into his office and demanded (allegedly amid much shouting and threats of violence) that all UK copies of “Whole Lotta Love” be immediately recalled and destroyed.  In Britain at least, Zeppelin’s “no singles” policy still held firm and thereafter only promotional 45s were issued in the UK until at least the 1990s.  Not every copy of “Whole Lotta Love” was destroyed, however.  A few slipped through the net, reportedly leaked from a warehouse in Manchester, and here’s the story of how I (almost) landed my own copy of this rarest of rare Led Zeppelin records.
In early 1970 I was living in London, but my girlfriend and I occasionally returned to our hometown of Sheffield for the weekend.  There we would visit a pub called The Raven Tavern on Fitzwilliam Street, down in the student quarter of the city.  In later years The Raven was renamed The Hornblower, then it became O’Hagans Bakery and Lounge Bar before disappearing altogether in the 90s, to be replaced by a modern office block. 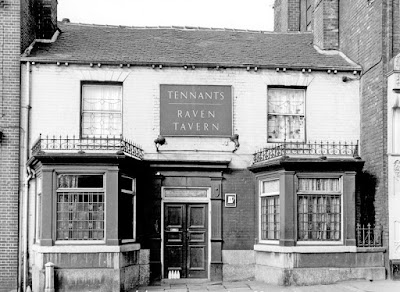 At that time the Raven had a pretty groovy jukebox containing some interesting back catalogue titles.  With three plays for a shilling in those pre-decimal days it was possible to monopolise the machine for 20 minutes or more with just a few judicious selections.  For example, in 1970 you could hear, if you were so inclined, “Hey Jude”, “MacArthur Park” and “America” by The Nice (three of the longest singles of the late 60s with a total running time of more than 21 minutes) for the equivalent of just five new pence.  With beer around two shillings (10p) a pint at the time, you really could have a good night out for less than a pound, and still have the bus fare home!

Scanning the titles on this particular visit I noticed the jukebox contained a UK pressing of the Led Zeppelin single "Whole Lotta Love".  Bingo! Even in early 1970 I knew this was an unfeasibly rare record and begged the pub landlady to take it off the jukebox and sell it to me.  I think I even offered her one pound for it!  Despite my entreaties she said this was simply not possible and couldn't be done until “the jukebox man" came to change the records the following week, at which time she promised "You can have it for a shilling, darling".  I was due to return to London the next day, so sadly I didn’t go back to get the record.  To this day I've yet to see another copy of the UK 45 and over the years I’ve watched with interest as the value has risen exponentially.  The price of that single today stands at well over £1,000 for a mint copy. 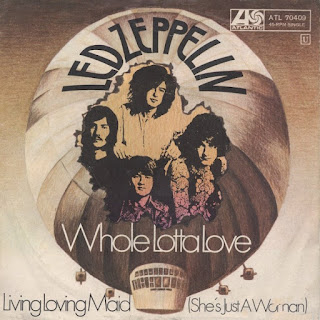 *Despite Peter Grant’s protestations, the “Whole Lotta Love” single was also released in Australia, New Zealand, Canada, Japan and several European countries in 1970, often with attractive picture sleeves. It became a top ten hit in 12 countries and reached number 1 in Australia and Germany. These pressings are generally far more common and less valuable than the withdrawn UK version.

Footnote: in 1970 the band CCS, a group of session men fronted by Alexis Korner, recorded a cover version of “Whole Lotta Love”, produced by hitmaker supreme Mickie Most. With spectacular irony, this recording was used as the theme to the BBC TV chart show Top of the Pops for most of the 70s. 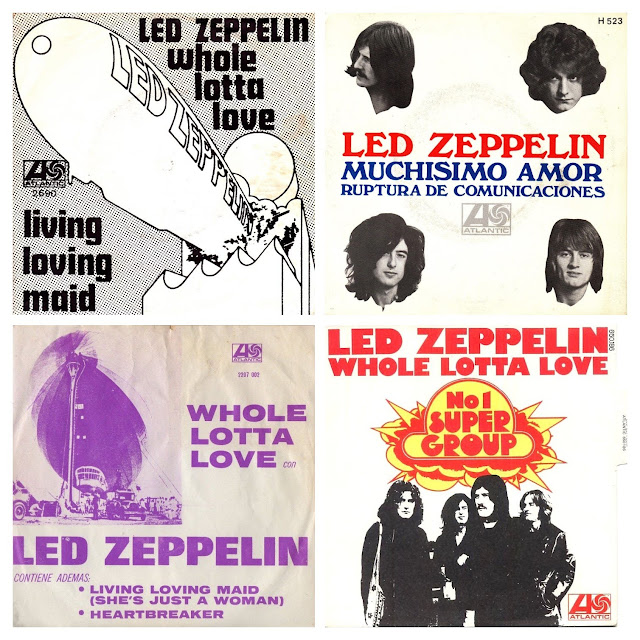 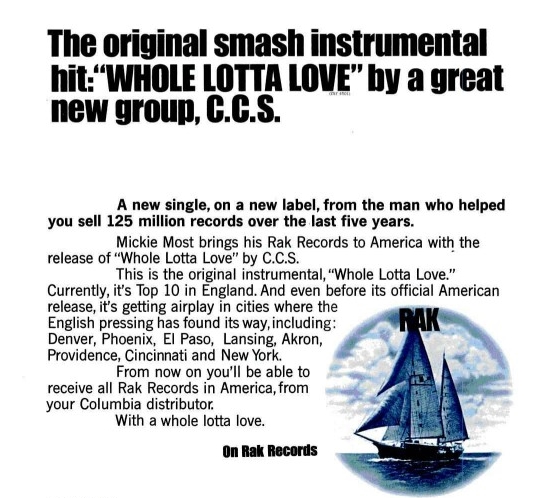 He Took It All Too Far, But Boy Could He Play Guitar - Peter Green: 25 Top Tracks

He Took It All Too Far, But, Boy, Could He Play Guitar Peter Green: His 25 Greatest Tracks, Ranked!    by Stuart Penney I met Peter Green on... 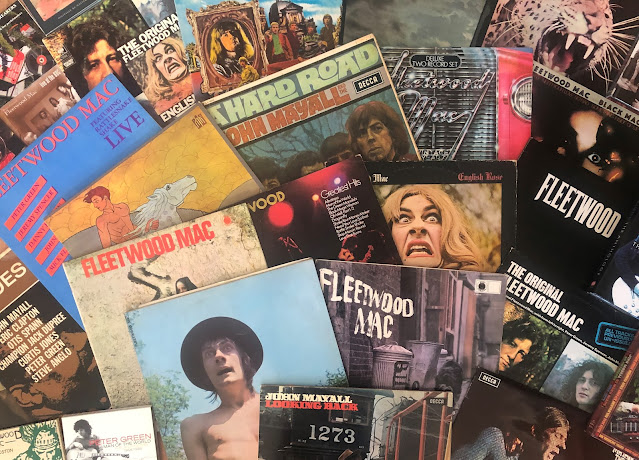 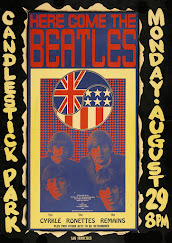 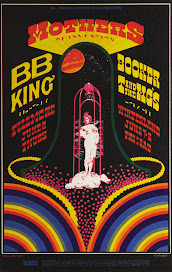