A Day Out At Highgate Cemetery

There can be few better ways to spend a bright spring afternoon in north London than a leisurely stroll through the gothic splendour of Highgate Cemetery, paying special attention to the final resting places of some of the more celebrated residents from the world of popular culture. 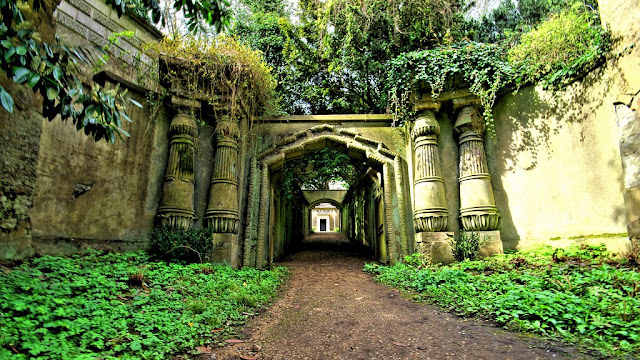 Established in 1839 Highgate contains approximately 170,000 individuals buried in 53,000 graves spread across the 15 hectares (37 acres) of the separate East and West Cemeteries.  Admission to the East part of the cemetery costs £3 plus a little extra for the guidebook, which may sound excessive for something we might normally expect to be free but believe me it's worth every penny, not least for the sparkling repartee delivered by the volunteers from the Friends of Highgate Cemetery who are on duty at weekends.

Looking for all the world like an older version of owlish comedian John Oliver, our guide was seemingly able to converse with the tourists in a range of languages and entertained us with macabre one-liners and irreverent patter.  I managed to flummox him momentarily with the old quiz night chestnut about Marx and Spencer winding up together in death (Karl the philosopher and Hubert the botanist, that is, who are interred across the footpath within yards of each other at Highgate) before he recovered his composure and added, theatrically, "I do the jokes around here!"

Leaving “Oliver” to regale a new party of visitors in what sounded like a variation of French of his own invention, we set off alone to explore the ancient and historic graveyard.

I was thrilled and saddened in equal measure to find a simple wooden plaque marking the grave of folk music legend Bert Jansch just a matter of a few yards away from the main gate.  The master guitarist died in October 2011 and, even sadder, his wife and erstwhile recording partner Loren, 20 years his junior, is buried alongside him. She passed on just a couple of months after Bert.  Update: since our visit the simple twin wooden plaques have been replaced with a grand marble headstone befitting the great man and his lady.

Up next was TV prankster and star of You've Been Framed Jeremy Beadle ("he died many times on TV, but we finally got him here" “Oliver” had quipped earlier during his warm-up briefing). While not exactly a rock and roll animal, before his TV career Beadle organised the ill-fated mudfest that was the 1972 Bickershaw Festival, featuring Captain Beefheart, Donovan, Hawkwind and the Grateful Dead. Not far away, the memorial of pop artist Patrick Caulfield is a sight to behold. Designed by the artist himself, it features the word "DEAD" in large art deco style lettering die-cut into a stepped marble headstone. It's beautifully done and guaranteed to raise a smile.

Perhaps the most infamous tenant of Highgate is punk impresario (or should that be "Svengali"?) Malcolm McLaren.  His rough-hewn wooden headstone is carved in rustic style and reads, simply, "Malcolm Was Here". Perhaps I was expecting a more cynical epitaph from the erstwhile Sex Pistols manager, but in hindsight, this one seems about right.

Moving quickly past the imposing and instantly familiar tomb that simply everyone comes to see (the one belonging to Karl Marx of course) I had some difficulty locating the much more discreet final resting place of comedian and actor Max Wall.
Starting out in music hall before WWII, Max had a major career revival in the 70s and even recorded an Ian Dury song "England's Glory" for the Stiff label.  He also appeared onstage with Dury at the Hammersmith Odeon in 1978.  Despite shuffling off as recently as 1990, Wall's weathered headstone looks like it might be a century old.


Nearby is the utilitarian headstone of campaigning journalist Paul Foot.  A great writer, Foot worked for many years alongside Peter Cook and Richard Ingrams on that most rock & roll of satirical magazines Private Eye.  Fittingly, his epitaph "Rise like lions after slumber In unvanquishable number..." is taken from Shelley's The Masque of Anarchy.


Working in an entirely different field of writing to Foot was Douglas Adams.  Best known for The Hitchhiker's Guide to the Galaxy and its many spin-offs, it's a little-known fact that Adams also wrote a sketch for the Monty Python TV show.  I was equally impressed to discover that Richard Dawkins dedicated his book, The God Delusion to Adams.  Protruding incongruously from the grave were several ballpoint pens, presumably left there by fans of Adams' writing.

Our final plot of interest belongs to Leslie "Hutch" Hutchinson the American jazz pianist and crooner.  Trained by Cole Porter in Paris he became Britain's first black superstar in the 20s and 30s before dying penniless in 1969.

And with that we set off for home, footsore and weary and with plenty of interesting graves left unseen.  But the last word must surely go to our tour guide “Oliver”. As we trudged out the cemetery gate he called after us, "Do you know which way to go?"  I began to assure him that we did, before he cut me off with a wave of his hand and said pointedly "No, I don't think you do. Stay on the straight and narrow and always follow the path of true righteousness".

Leave 'em laughing seems to be their motto at Highgate. 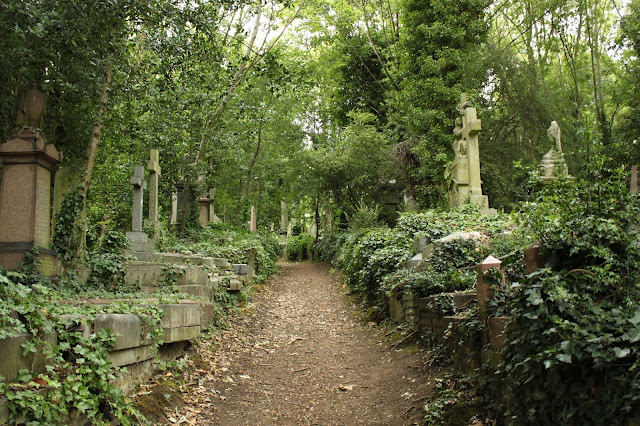