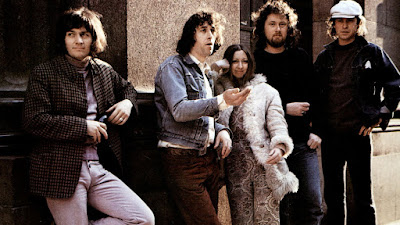 “Has there ever been a first LP which was not ‘eagerly awaited’?” asked the faintly sardonic opening line of John Peel’s original sleeve notes for The Pentangle.  In 1968 there was no greater accolade than the Peel endorsement and Pentangle had recorded a coveted live session for his Top Gear radio show some months before their debut album was released.  The liner notes concluded, 400 carefully chosen words later, with “Play this record to those you love”.  Peel later confessed embarrassment at his florid prose style but not before that final line had been used as a sales pitch by Reprise records in their advertising campaign when the LP was released in the US.

Alongside that reassuringly familiar Peel by-line, record store browsers in May 1968 may also have recognised the sleeve credit “A Shel Talmy Production”.  An American, resident in London since 1962, Talmy had produced big hits for The Who, The Kinks, Manfred Mann and The Easybeats (plus a couple of resounding flops by a pre-fame David Bowie) before dallying in prog folk with early albums by Pentangle and Roy Harper.  This improbable union came via Jo Lustig, another Brit-based American who managed both Harper and Pentangle at the time.


Pictured on the front cover in stark black and white silhouette beneath a modish woodblock-style logo the band members appear virtually unrecognisable despite the (strictly alphabetical) list of names below.  The simple, yet somehow mysterious sleeve design is credited to Osiris (Vision) a company with close links to those doyens of the 60s underground International Times and Hapshash and The Coloured Coat.  Four decades later the distinctive hand-drawn band logo became known as the “Pentangle font” when, in 2008 it was commercially developed by the Manchester company K-Type.

The individual Pentangle musicians were already familiar in folk and jazz circles if not to the wider record-buying public and all five members had previously worked together in some combination or other.  Bert Jansch (“owner of the most mispronounced name in Britain”, according to Peel) and John Renbourn had recorded together extensively and by 1968 were the undisputed glamour couple of British folk/blues guitar.  Jacqui McShee, a singer blessed with a silken voice of astonishing purity was a rising star in the folk world who had played in a duo with Renbourn and guested on his second album Another Monday.  The rhythm section of Danny Thompson and Terry Cox were even more well-travelled, having recorded TV soundtrack music with Renbourn and appeared on countless prestigious jazz/R&B sessions since the early 60s.  Bert was making friends in the rock world, too.  In 1967 he received a name-check (presumably at Neil Young’s behest) alongside Hank Marvin, Frank Zappa, Eric Clapton, Jimi Hendrix and countless other luminaries on the sleeve of the second Buffalo Springfield album Buffalo Springfield Again.

To sum up: packaged in an unassuming sleeve with the anonymous catalogue number Transatlantic TRA 162, here was the debut record by a quintet of folk/jazz aristocracy, produced by the man who gave us “My Generation” and carrying the blessing of John Peel.  On paper it looked like an irresistible combination.

Fittingly it’s the sound of Danny’s buzz saw stand-up bass which introduces Pentangle to the world with the traditional “Let No Man Steal Your Thyme”.  First documented in the late 17th century this cautionary tale of young love became a folk staple with countless versions, including a 1963 recording by Bert’s erstwhile girlfriend Anne Briggs.  From the opening notes it was clear this was no ordinary folk group. The song moves with a distinct jazz swing feel as Bert and John weave their acoustic magic behind the bass and drums and Jacqui’s vocal rises clear and strong. “Let No Man Steal Your Thyme" c/w "Way Behind The Sun” was issued as Pentangle’s debut US single in November 1968 (Reprise 0784).

The instrumental “Bells” was conceived by Bert and John before Pentangle was formed and in early 1967 a Danish TV crew filmed them working on the piece in their St. John’s Wood flat (the black and white footage can be seen on YouTube).  Originally titled “Belles of St. Mary's” the album version of “Bells” develops from a tightly arranged guitar duet into a drum showcase as Terry Cox delivers an early solo.

Aside from “Hear My Call” all songs on the album are credited to the five Pentangle members, or a combination thereof, as writers or arrangers.  First recorded in 1962 by the Staple Singers on their Riverside LP Hammer and Nails, “Hear My Call, Here”, (to use its full original title) was written by Wesley Westbooks and Roebuck “Pops” Staples, following a racist incident involving Wesley’s daughter.  A stately gospel blues in waltz time, Pentangle’s version is taken at a similar leisurely pace to the original and features a tasteful solo from John, with Jacqui matching the Mavis Staples vocal every step of the way. An alternate take of the song is also included here.

Here’s a quick question.  What do Black Sabbath, Bad Company, Motorhead and Pentangle have in common?  The answer is they’ve all recorded eponymous or self-titled songs. Starting with a brief vocal verse, “Pentangling” quickly turns into a complex improvised piece split into several movements, including a vocal refrain which, serendipitously, sounds not a million miles away from the 1966 Donovan song “Bert’s Blues”.  The version here runs for just 7 minutes, but in concert “Pentangling” often extended to 20 minutes or more, with John playing his Gibson ES335 electric guitar and usually featuring a mighty bass solo (or three) from Danny.  These lengthy excursions earned the band the (hopefully, tongue-in-cheek) nickname “the Grateful Dead of folk” in some quarters. In 1973 Transatlantic released a compilation LP titled Pentangling (TRA SAM 29).

“Way Behind The Sun” is a blues featuring Renbourn on slide and a convincing Surrey delta vocal performance from Jacqui. It’s credited here as a traditional song arranged by the entire band, but it’s likely Pentangle learned it from a 1964 LP by Barbara Dane titled Sings The Blues With 6 & 12 String Guitar (Folkways FA 2471).  Three versions are featured here, including an instrumental take.  In 1969 The Byrds recorded a version of “Way Behind The Sun” during their Ballad Of Easy Rider album sessions.

An epic murder ballad in the finest tradition, “Bruton Town” goes under many titles, including “The Bramble Briar”.  Davy Graham and Martin Carthy recorded versions in 1963 and 1966 respectively and Maddy Prior and Tim Hart tackled it in 1968, pre-Steeleye Span.  Comparisons with Fairport Convention’s “Matty Groves” are unavoidable, especially as “Bruton Town” became a cornerstone of Pentangle’s live set, where it remained throughout the life of the band.  A version recorded in concert at London’s Festival Hall in June 1968 appeared on the Sweet Child album.  Three studio versions of “Bruton Town” can be found here, including the previously unreleased Take 5.
The original 1968 album ended with the instrumental “Waltz”.  This instrumental tour de force had previously appeared on John’s Another Monday album, but the Pentangle version is extended to include a formidable bass solo and a side excursion into Mingus territory.  Listen for Danny’s(?) jubilant scream at 4.23 as the main theme returns.

The UK debut Pentangle single “Travelling Song" c/w "Mirage” (Transatlantic/Big T BIG109) was released concurrently with the album in May 1968.  The pop/folk B-side was taken from the LP, but “Travelling Song”, written in tribute to Simon Bouchant (a friend of Bert then recently killed in a car crash) is one of the great disappearing Pentangle tracks.  Aside from a brief appearance on the 1968 Transatlantic various artists sampler Listen Here (TRA SAM 2) it remained unreleased on album until the CD era when it began to appear on Pentangle compilations, or as a bonus track.  “Travelling Song” takes its rightful place here as part of the debut album sessions.

With its unfathomable time signature, the leftover instrumental “Koan” was probably a stroll in the park for Danny and Terry with their jazz chops, although it may have been uncharted waters for the folk guys.  Written and recorded by renown session guitarist Big Jim Sullivan for his 1967 album Sitar Beat, Big Jim’s original featured John McLaughlin on guitar.  Two unreleased Pentangle versions (takes 1 and 2) appear here.

“The Wheel” originated on Bert’s 1965 second LP It Don’t Bother Me where it was one of three genre-defining guitar instrumentals.  The added bass and drums on the Pentangle recording breathes new life into the piece.  Another of Bert’s knuckle-busting instrumental excursions, “The Casbah” started life on his Bert Jansch debut LP where it was performed at a fair old lick.  Pentangle took it at a more leisurely pace and added a jazz swing feel, to great effect.

Recorded in August 1967 at the first Pentangle recording session, “Poison” was left off the original album although Bert would re-record the song for his 1969 Birthday Blues LP, where he was backed by Danny and Terry, plus Duffy Power on harmonica.

The Pentangle is one of the truly great debut albums of the 60s.  It was recorded at a time when their collective genius was operating at full tilt and in an era when anything seemed possible.  Here was a band who resisted classification and went against the grain of popular music, yet at their peak sold records aplenty.  With their intoxicating blend of folk, jazz, blues and rock, Pentangle amazed and delighted us in equal measure.  There were folk rock bands before they came along and there have been plenty since, but the music on this album will probably outlive us all.