It must have been around March or April of 1968 when I heard the Yardbirds in session on John Peel’s BBC radio show Top Gear.  This late incarnation of the band played a loud and heavy set which sounded nothing like the blueswailing R&B outfit of yore, and I made a mental note to investigate them further.  I didn’t know it at the time, but this was one of their final performances and by June the Yardbirds would be no more.

Fast forward a few months and posters started to appear around town advertising a show at Sheffield University Students’ Union by “The New Yardbirds”.  I’d read in Melody Maker that the original Yardbirds had folded and this new band featured a different line-up with guitarist Jimmy Page as the only constant member.  Other than that, I knew little about them.


Back then the college circuit played host to the cream of the burgeoning prog, blues and folk-rock movement and Sheffield Uni was no exception.  Between 1968/69 I saw a range of memorable shows there by King Crimson, Family, Aynsley Dunbar Retaliation, Chicken Shack, Incredible String Band, John Renbourn, Bert Jansch, Freddie King and many others.  I didn’t actually attend the university and non-students weren’t admitted unless signed-in by a member of the union.  This had never been a problem in the past however and with a little smooth talking it was always possible to persuade a passing student to oblige.

So it was that on November 23, 1968 I pitched up at Sheffield University to see “The New Yardbirds”, or so I thought.  As it turned out the band had changed their name after just a few shows and by the time they reached Sheffield they were already trading as Led Zeppelin.  The posters had been printed months ahead of time so, unlikely as it seems now in the age of instant communication, some concert goers arrived unaware of the name change and not exactly sure who or what they were going to see.

Now, discounting a few September 1968 shows in Scandinavia where they fulfilled some outstanding Yardbirds’ dates, the Sheffield concert was just the tenth show the band had ever played (and only their fifth as Led Zeppelin).  Let’s pause and think about that for a moment. Not only that, their debut album was still four months away. This was a brand-new band with no recorded product in the shops and only Jimmy Page’s Yardbirds pedigree as a drawcard.  So, it’s probably fair to say they were an unknown quantity to the majority of the 400 or so punters who showed up that night.
The Union hall was perhaps the size of a school gymnasium and the stage, such as it was, consisted of a number of 3-feet square by one-foot high wooden blocks pushed loosely together.  Too loosely as it turned out, but we’ll hear more about that later. The ticket price was ten shillings (50p) or thereabouts and it was standing room only. If you wanted a seat, the parquet floor was your only option.

Heavy Rock may have existed in 1968, but it had yet to be given a name.  Jeff Beck’s Truth album, perhaps the blueprint for all that was to follow, had gone on sale in August and it had also clearly influenced the direction Page would take with his new band.  At this point the embryonic Zeppelin’s music was a harder-edged version of the psychedelic blues of Cream and Hendrix with a small but significant side order of acoustic folk rock. 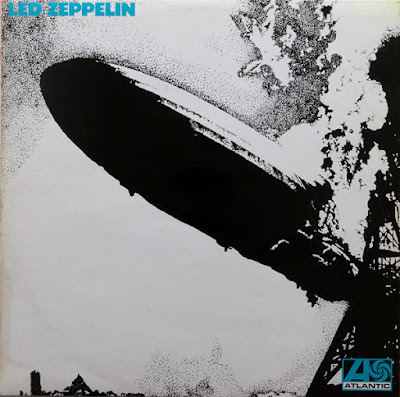 *Led Zeppelin’s debut LP was released in March 1969. Only very early UK copies appeared with blue lettering before the design was changed to orange
Opening with a staccato “Train Kept A-Rollin’” the band sounded tight, powerful and almost painfully loud.  This 1951 Tiny Bradshaw song, as popularised by the Johnny Burnette Trio in 1956, had been part of the Yardbirds’ canon even before Jimmy Page joined the band.  It was the perfect start although Plant’s shrieking vocals were an unfamiliar shock to the ears.

To this impressionable 18-year-old, almost as impressive as the way Zeppelin sounded that night was the way they looked.  Page in particular couldn’t have been cooler with his leonine mane of black hair, shocking pink velvet suit, frilly shirt, red high-heeled boots and hand painted 1959 “Dragon” Fender Telecaster.  Originally blonde, the guitar was a gift from Jeff Beck when the pair were in the Yardbirds together and it had gone through several different paint jobs since. I’d like to go on record here and claim that Jimmy Page never looked better than he did on this November 1968 night.

Robert Plant on the other hand was still a year or so away from perfecting his rock god look and, on this occasion, looked more like a refugee from a hairdressing salon than a Viking warrior.  With cherubic (and still quite short) blonde curls, tight blue satin ruff shirt and mod style black Levi’s sta-prest pants, his ensemble was topped off with, bizarrely, open-toed Dr. Scholl’s wooden sandals, complete with black socks!  John Paul Jones and John Bonham played impeccably, as always, but seemed somewhat anonymous alongside the two strutting frontmen.

The cramped, knee-high stage was constructed from several square wooden blocks sitting side by side.  These were clearly not secured too well as, during Bonzo’s drum solo “Pat’s Delight” (part of which he played sans sticks, using the palms of his hands), they began to drift slowly apart, causing part of his kit, including the hi-hat and one of the floor toms to list alarmingly to starboard.  Standing only a few feet from the stage I clearly heard Bonham exclaim “My life!” before a vigilant roadie leapt onstage to rescue the situation.

The set list was a mix of blues standards, Yardbirds leftovers and around half of the then-unreleased first Zeppelin album.  Surprise of the night was an extended version of the 1964 Garnett Mimms soul classic “As Long As I Have You”. Running for around 15 minutes, it took the form of a sprawling multi-part workout incorporating sections of Spirit’s “Fresh Garbage”, Sam Cooke’s “Shake” and the Willie Dixon classic “I Just Wanna Make Love To You”.  This song stayed in the Zeppelin set well into 1969, although it remains officially unreleased. After the gig, the band were approachable and seemed happy to hang around chatting to the remaining crowd members, answering inane guitar questions from (ahem) some of us while the gear was packed away.

In the weeks that followed, we discussed the show endlessly and decided that while Jimmy Page was certainly a guitar god in the making, Zeppelin may have had the rug pulled out from under them by Jeff Beck, whose first album Truth was already in the shops.  The exact opposite would prove to be true, as it turned out.  Ah, the folly of youth. How were we to know?