Frank Zappa – The Crux Of The Biscuit 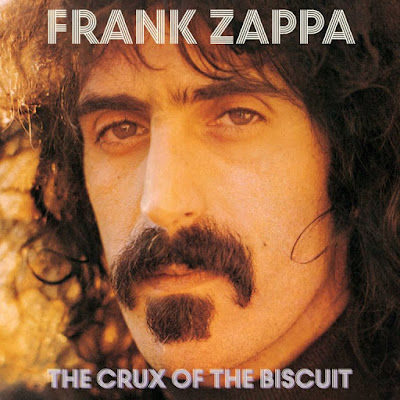 The Crux Of The Biscuit (Zappa Records ZR20020)

People sometimes ask me “Where’s the best place to start with Frank Zappa?”  With a back catalogue of such daunting proportions it’s a reasonable question, after all.  These days all of Frank’s official albums are numbered on the CD spine in order of release starting with his 1966 Freak Out debut as album #1.  When I tell you that The Crux Of The Biscuit is album #102* you can appreciate the dilemma facing the novice Zappa listener.
The stock answer to the question is, of course, Hot Rats, or One Size Fits All, or maybe Apostrophe.  Then again, let’s not forget Overnite Sensation or possibly Sheik Yerbouti and… well, you get the picture.  Those were, after all, his biggest sellers from the early/mid 70s when the mainstream rock world finally caught up and we achieved peak Zappa.  But it’s a glib and lazy answer, too. FZ covered so much ground over a three-decade recording career that to narrow him down to just a handful of well-known albums would do the man a huge disservice.  Classical, heavy rock, jazz (fusion, modern and freeform), comedy, avant-garde, musique concrete, electronic, straight rock and god knows what else. Zappa did it all and he did it in style – and sometimes he did it all on the same album.  His records are bursting at the seams with wonderfully diverse musical themes and rich concepts, all of it delivered with jaw-dropping virtuosity. Often, a single song by Frank contains enough information - stops, starts, twists and musical U-turns - to fill an entire album by a lesser artist.  While a full Zappa album routinely features more musical ideas than most bands are likely to come up with during an entire career. And if you think that’s hyperbole, have a listen to, say, “Inca Roads” a track from the One Size Fits All album.  Even if Frank had only ever recorded just this one piece, he’d still be guaranteed immortality.
Since Zappa died in 1993, leaving a seemingly bottomless vault of unreleased material, the FZ Family Trust has issued a regular stream of archive albums, some of them truly great, others of interest to hardcore fans only and a few not really up to the high standards he set during his lifetime.  Thankfully The Crux Of The Biscuit is a major work.  The title is a line from “Stink-Foot”, a song from the 1973 Apostrophe album and what we have here is a series of outtakes and early, alternate versions of tracks from Zappa’s most commercially successful record in the United States.  An alternate Apostrophe album, if you will.
“Cosmik Debris” appears twice.  In slightly different remixed form and as an instrumental version featuring the basic track minus Frank’s lead vocal, so we can hear exactly what that great band were up to.  I had to listen very hard to spot any differences between this remix and the original album version, but differences there are, mostly in the form of previously unheard backing vocals and sound effects.  The instrumental take is more interesting. It features the backing track from Apostrophe with an earlier guitar solo which Frank replaced before release. The band are doing incredible things on this track, most of which can’t be clearly heard on the released version, but without the vocals it’s all there to be enjoyed.

When he chose to, Frank could write a catchy pop song as good as anyone and an outtake of “Uncle Remus” really highlights that lilting, hummable melody.  Perhaps fortunately for his fans, Zappa could never bring himself to write radio friendly lyrics to match the tunes.


On a snippet from a 1973 Australian radio interview Frank tells the convoluted story of “St. Alfonzo’s Pancake Breakfast/Don’t Eat The Yellow Snow” before a live version from Sydney’s Hordern Pavilion brings it all to life.  This is the only concert track on the album. Everything else is studio material of the highest quality.
Jack Bruce devotees will find much to enjoy here, as the virtuoso bass player is all over this album.  In true sardonic Zappa style, Frank once dismissed Jack’s thunder and lightning bass work on the Apostrophe title track as “too busy”.  Well, he can be as busy as he likes as far as I’m concerned, this is great music. Jack takes control of what was essentially a jam session with Frank on guitar and Derek & the Dominos drummer Jim Gordon behind the kit and turns it into a thunderous instrumental tour de force.  The “Apostrophe” and “Down In De Dew” tracks originally started life as two parts of one extended piece titled “Energy Frontier” and there are three unreleased extended versions here, some with a distinct raga rock/prog feel featuring an “unknown” flute player (as the sleeve notes tell us).  Even for non-Zappa aficionados Jack Bruce features so prominently on these tracks that it’s worth the price of admission alone.

The album ends with a spoken track titled “Frank’s Last Words”.  Not, thankfully, his actual final utterances, but a happy sounding Zappa winding up a recording session with studio banter and “OK that’s the take” over the talkback speakers.

If you’re a fan of the Apostrophe album and Frank’s music generally from this period, then I guarantee you’ll love The Crux Of The Biscuit.  It’s the perfect companion to one of his most accessible albums. Who knows, it may even be the ideal place to embark on your Zappa listening experience. 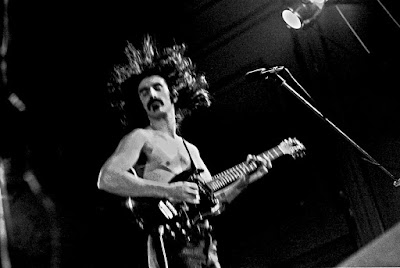 *This review was originally written in 2016.  At the time of this update (October 2019) the number of official Zappa releases has reached album #114 and counting.