Budgie - Not Your Ordinary Inflight Entertainment

Even as a kid I loved power trios. Jimi Hendrix, ZZ Top, Cream, Grand Funk and The Robin Trower Band, to name a few, are all great outfits. I’ve tried to work out what it is that makes them appeal to my ears more than other band configurations, and I think it just boils down to the fact that for obvious reasons, the rhythm section and particularly the bass player, has to work that little bit harder to keep the songs driving along during the solos and when any progressive changes are explored.
However, above all those I’ve credited here, there is one, for me at any rate, who took it to a very different level indeed. This was Budgie, a three piece from the southern valleys of Wales. They formed in 1967, not as many would imagine as a result of having witnessed Hendrix or Cream, but as the band's vocalist, bassist and frontman Burke Shelley explained, it was a result of seeing another local Welsh trio Love Sculpture, featuring legendary guitarist Dave Edmunds. Love Sculpture played in and around the Cardiff area, doling out heavy treatments to blues standards as was often the case as some bands tried to break out of the strict 12-Bar blues form, so popular at the time. “They were the best band you have ever seen in your life and they were only a three- piece” Burke told a biographer writing about the many rock acts who had worked in the now legendary Rockfield studios, where Budgie ended up recording a lot of their best work. 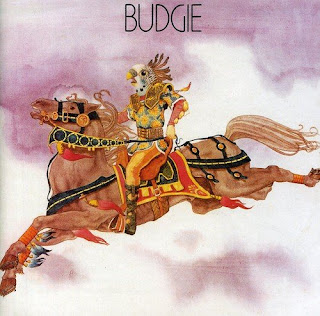 Their self-titled first album, released in 1971 and produced by Rodger Bain, who also produced the earliest albums by Black Sabbath & Judas Priest, is not as dynamic as say Led Zeppelin's debut or as dark as Black Sabbath's first offering but it definitely has its very own heaviness going on. A Rodger Bain interview on the sleeve notes to a vinyl best of Budgie compilation Suicidal Homicidal back in 1985, best describes the scene.  “I first saw Budgie when Kingsley Ward, the mastermind behind Rockfield Studios, arranged for Burke and the lads to audition in his studio. I had just completed some heavy recording sessions with 'The Earth Blues Band' who were later to change their name to Black Sabbath, and Kingsley thought I would be interested in hearing the Welsh answer to 'The Birmingham Bashers'. Kingsley was quite right, I was. Apparently, the band had never met a "Record Producer" before, and expected me to arrive in a white Rolls Royce, smoking a foot long cigar and wearing a nine carat gold knuckle duster! When they were told that their roadies had to meet me off the train at Gloucester station, they were quite relieved. I knew straight away I wanted to work with this band, and we agreed there and then to record the first album, despite the fact that it was now the middle of winter and the snow lay two feet deep around the Welsh studio. Every playback was preceded by a fight for the best place in front of the parrafin stove, in fact Burke wore woolen gloves for most of the takes (so that is the secret of his heavy bass sound!)”


The album itself kicks off with the very chunky riffed “Guts”. In fact those left wanting more after Black Sabbath, would have been blown away by this tune, it almost feels like a precursor to the Sabs' almighty “Sweet Leaf”. I have to add at this point, the album as a whole is nothing like anything by Sabbath. There’s much more bass and guitar interplay, which gives some songs a progressive feel and there’s a humorous element throughout, that comes to the fore in the amazingly entitled “Nude Disintegrating Parachutist Woman” , check out the manic guitar and vocal harmonies in there. Then there’s the brutal “Homicidal Suicidal”, picked up 30 years later by Soundgarden. It’s almost like a prototype grunge tune. Who would’ve known? The projected influences all over this album are hard to deny. The use of a couple of lighter acoustic numbers between the bigger power tracks is used to this day by the mainstream metal acts. In America the original LP also featured another song meekly titled “Crash Course In Brain Surgery”, it was a single in the UK but disappeared without trace until a few years later when it turned up on the bands 4th album In For The Kill.  For a long time Lars Ulrich, drummer for America's biggest metal band, Metallica, had enthused about the virtues of Budgie, which resulted with the song eventually ending up on the bands highly regarded and collectable $5.98 Garage Days Revisited vinyl EP in 1987. Which was upgraded 11 years later to a full length album where they also covered the Budgie classic “Breadfan” from Never Turn Your Back On A Friend. 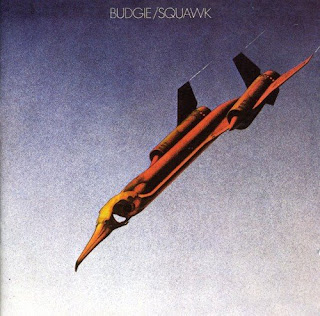 It’s probably fair to say that this spirited opening didn’t set the charts alight but by all accounts it sold steadily, and through intensive gigging with the likes of Mott The Hoople, Thin Lizzy and Deep Purple offshoot Warhorse, they started to pick up a loyal following. With their second album Squawk, released in 1972, they consolidated the approach of mixing lightweight melodies in amongst some blistering riff work by wonder guitarist Tony Bourge. The stand out being the aptly titled “Hot As A Dockers Armpit”. Wrapped, almost amusingly, in a Roger Dean cover, depicting a skeletal bird of prey morphed into a jet fighter, Squawk certainly looked like the band were going places. Each track showed an enriched approach to song structure and studio technique but the overall sound of the album was dragged down by a very thin sound mix, particularly the drumming. Drummer Ray Phillips always bemoaned the fact that even after a quick remix of the album, where a slight improvement was made, time and money factors pushed them back out onto the road. It may have hindered some of their sales momentum but it was certified Gold for over half a million copies sold in the US alone the following year.
After more work out on the road across Europe, often doubling up with the similarly hard working Judas Priest, Budgie hatched their third album in June 1973 Never Turn Your Back On A Friend, which contained probably their finest and best known barnstormer “Breadfan”. Self produced, the album showed a real maturity, both in sound and song craft, switching from solid grooved riffs to driving acoustic sections, and even dabbling with a dramatic ballad of sorts on the atmospheric “Parents”. It also has its fair share of zany titles "You're the Biggest Thing Since Powdered Milk” and the often amusingly recounted by devotees and press alike, "In the Grip of a Tyrefitter's Hand". Both of these tracks, and the aforementioned “Breadfan”, became fan favourites and were included in live setlists throughout the band's 40 year career.


I have spent many an earnest hour or two with friends and fans debating why Budgie never really hit the commercial heights of their contemporaries Sabbath and Priest. I even asked Burke Shelley after a very sweaty set played in a tiny bar in Milton Keynes, back in May 2002. His answer was simply that MCA, their record label at a critical time in their development, never really knew how to take the band to the next level. A couple of ads in the music press per album, doesn’t make for a glittering launch to any album, not even in the early seventies. I personally feel that the band name didn’t help, it belittled the content of some of the heaviest albums ever made and wasn’t cool enough for the hipsters to carry around school, as we were apt to do in those days. I made many judgements and friends based on the record sleeves I could see around the playground. There were even a few folks who pegged them as a "Welsh Rush" when those Canucks came to prominence in the mid seventies. I couldn't really get the similarity myself but there's no denying Burke Shelley and Geddy Lee play great bass and both sing in the upper ranges of metal's vocal spectrum.

Budgie carried on producing some great albums throughout the seventies and eighties, In For The Kill  in 1974 and the excellent Bandolier in 1975 followed, with powerful and original tunes all over them. They even had a really good crack at America while touring behind 1978’s slick Impeckable offering, having augmented their sound to two guitarists for the previous album, the patchy but innovative If I Were Brittania I'd Waive the Rules. Both albums were released on their new label, A&M records. The lack of funds and support proved too much for guitarist and founder Tony Bourge, who called it a day at that point. Burke Shelley pushed on undeterred, going through some commendable guitarists before the band finally found solid writing and riff work from “Big” John Thomas who’d previously plied his trade with the George Hatcher Band. They made a stunning album in 1980, Power Supply, its timely arrival saw them in the mix, unbelievably, to benefit from the “New Wave of British Heavy Metal” movement, a complete career resurgence complemented with, as the metal press called it at the time, "heroes’ return" performances at the 1980 and 1982 Reading Rock Festival, where they also played tracks from 1981’s popular Nightflight album. The live broadcasts recorded at these shows were played on Tommy Vance's Friday Rock Show and finally highlights of both shows found their way onto a licensed live double CD package called We Came, We Saw.. released in 1998.
The early 80s activity even saw the band guest on Ozzy Osbourne's Blizzard of Ozz tour.
One more major label release on RCA in 1982, Deliver Us From Evil even featured a keyboard player but its attempted step on to the more commercial radio friendly rock platform, popular at the time, was not a fan favourite, although it kept the band gigging and even finding themselves with a huge following in Eastern Europe. They gigged fairly solidly right up to 1988 with the same line-up, before a 12 year hiatus and an eventual reunion in the 2000’s using a variety of guitarists. I caught them many times and was never less than inspired by the band. Burke was always full on, ensuring everything was as tight as it could be. 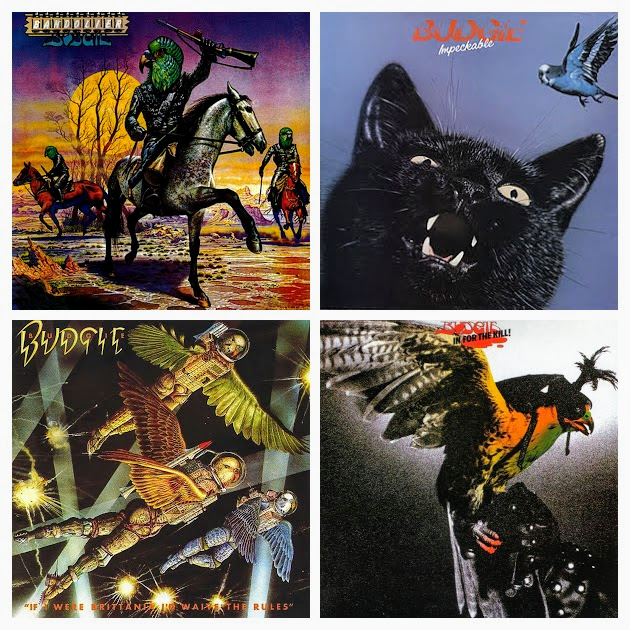 From 2004 until the end of the decade most of the albums I mention here underwent a thorough and valid CD reissue programme. With all tracks remastered and overseen by band members, who also contributed new sleeve notes etc. If you like early Sabbath or Priest but never really explored the Budgie albums of the time, I promise you won’t be disappointed.

Email ThisBlogThis!Share to TwitterShare to FacebookShare to Pinterest
Labels: Budgie