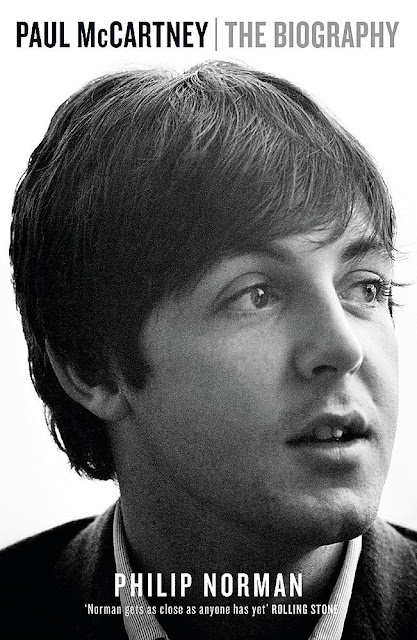 Soufflé-speak.  I don’t know if Philip Norman coined that expression himself, but it crops up countless times in his latest book.  It refers to Paul McCartney’s ability to charm his way through an interview with seemingly frank and friendly answers, while remaining unfailingly diplomatic and giving away very little of value.  Thankfully, Norman digs much deeper than Paul’s soufflé-speak to come up with one of the most searching and readable McCartney biographies in a long time.
Philip Norman has been here before of course, authoring acclaimed books about the Beatles, Stones, Jagger, Lennon and others.  But it was his most famous work, the 1981 million-seller Shout which very nearly scuppered this entire project.  Written during the nostalgic tsunami following the death of John Lennon, it painted an overgenerous view of the man who, Norman claimed, represented “three quarters of The Beatles”.  Shout presented a clichéd picture of John the acerbic rocker vs Paul the ballad-writing family man.  Some snarky “granny music” quotes from Yoko didn’t help matters, either.  Understandably, this didn’t go down at all well at McCartney HQ. It took some doing, but Norman eventually received tacit approval to write this book, (“tacit” meaning that he received assistance with sources and information, but there was no direct involvement).
I don’t know about you, but I never get tired of re-visiting what is, to scholars of popular culture, at least, the Greatest Story Ever Told.  Since 1963 it seems like I’ve read a thousand books about the Beatles, but, like all the best addictions there will always be an excuse for just one more.  Skilfully written and highly readable, the story treads familiar ground until the 1970 break-up, when it shifts up a gear as we enter the solo years and Norman no longer must juggle four equally weighty life stories.
The immediate post-split legal shenanigans were comprehensively detailed in Peter Doggett’s excellent book You Never Give Me Your Money, but Norman’s lighter touch is more entertaining and the narrative builds nicely as each new character enters the picture, culminating with the arrival of manager Allen Klein as the archetype pantomime villain.
This story is so familiar, we can predict almost every word of what’s coming next, so it’s refreshing when Norman presents new information, as he does from time to time.  We learn that Paul no longer owns his famous Scottish farms on the Mull of Kintyre, for example. The inspiration for so many McCartney songs over the years, the properties were recently sold and the two farm managers with 55 years’ service between them were dismissed, with one caretaker given just three months’ notice to vacate his grace and favour house.
Paul’s first wife Linda is portrayed as a saintly figure throughout and the couple clearly had a strong, loving relationship.  When she is offered a ghost-written book deal of her own, however, Macca, we are told, nixes it, snapping, “There's only one fucking star in this family.”  Likewise, the news that, in 2006, Paul’s brother Mike was charged with (and subsequently acquitted of) sexual assault provides an interesting diversion, as does the coverage of Paul’s recent heart scare and subsequent hospital treatment.
It’s not all plain sailing, however.  Paul’s 1984 movie disaster Give My Regards To Broad Street receives full, no holds-barred coverage, as does the 9 days he spent in a Tokyo jail cell on a drug smuggling charge.  But it’s the Heather Mills chapters we’ve been waiting for and Norman doesn’t hold back. “Salacious” doesn’t begin to cover it as we are given an 80 page blow-by-blow account of the doomed marriage and subsequent £20 million divorce settlement, described by one lawyer as “legal Armageddon”.  It’s unseemly, often embarrassing and casts a dark cloud over much that has gone before.  Yet, like a car crash, we simply can’t look away. Not for the first time, the question arises: “what on earth was Paul thinking?”.  In a Q magazine interview not long after the annulment McCartney was asked if the marriage to Heather was the biggest mistake of his life.  With the soufflé-speak dialled up to eleven he replied “It would have to be up there”.
It’s worth noting that I experienced this biography on two platforms.  After reading the physical hardback book, I went back to the beginning and listened to the 30-hour audiobook version during my daily commute.  Narrator Jonathan Keeble brings the audiobook to life with a range of accents, including all four Beatles, Linda, Yoko and even a delightfully cartoon-like Heather Mills, complete with her trademark Geordie glottal stop.
I’m a stickler for mistakes in rock biographies and while this one is generally well researched, the pedants among us will bristle at a few of the more contentious claims.  Wings were certainly not a glam rock band, as Norman declares; the Sex Pistols single “God Save the Queen” can hardly be described as “a shrieking parody of the (British) national anthem” and Kate Bush’s vocal on “Wuthering Heights” mercifully bears little similarity to Yoko’s infamous wailing, as the book states.  But otherwise I’m pleased to say I found only a solitary factual error throughout the entire book. Denny Laine’s post-Moody Blues/pre-Wings outfit the Electric String Band is referred to, unforgivably, as the Incredible String Band, the Scottish acid folk outfit.  This howler is found in the audiobook version only, however, and not in the physical book.