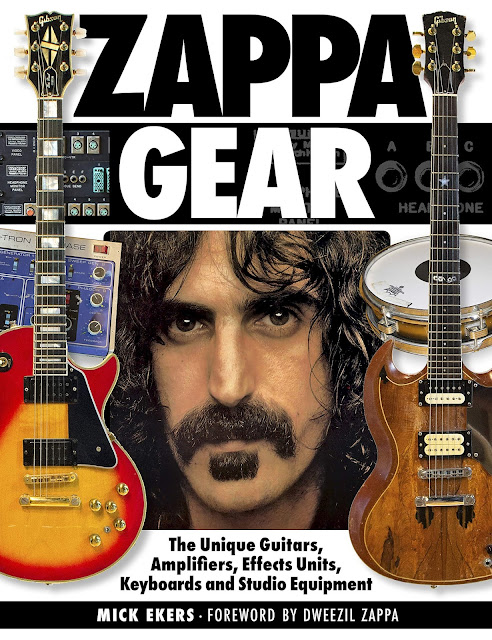 First there was Beatles Gear, followed by Rolling Stones Gear and The Black Strat, the story of David Gilmour’s famous Fender. Now we have Zappa Gear. Do we see a trend developing here? In truth the market has been crying out for books of this nature and it’s good to see it finally developing into a legitimate genre. Although unconnected, all these titles share a common theme. Packed with insane amounts of forensic detail, they are a gearhead’s wet dream, yet should also appeal to fans of a less technical inclination who just like to look at beautiful pictures of famous and instantly recognisable guitars.

Zappa Gear (the lack of a possessive apostrophe “s” is deliberate, a last-minute suggestion by Ahmet Zappa) has endured a long and, at times, painful gestation. The foreward by Dweezil Zappa is dated July 2013 and the idea was first conceived way back in 2010. Ekers met with many delays and obstacles along the way, not least finding himself in the middle of a family feud when matriarch Gail Zappa and son Dweezil had a major falling-out, resulting in the family being split down the middle for some years. Both sides became firmly entrenched and the book, although almost finished, was put on hold after Gail became ill and sadly died in 2015. Finally, the siblings sorted out their differences to some degree and Mick emerged triumphant as the book finally appeared at the end of 2019.

Ekers’ trump card was gaining access to the equipment and instruments themselves. He was twice invited to the Zappa house in the Hollywood Hills (since sold to Lady Gaga) and allowed to ask questions, take notes, handle and photograph the precious items contained within Frank’s studio, the Utility Muffin Research Kitchen (UMRK). Importantly, the project was also given the Zappa Family Trust (ZFT) seal of approval by Gail herself.


The main appeal of this book is, of course, Frank’s guitars, but that only takes up 80 of the 230+ pages. Also covered in precise and painstaking detail are the various amplifiers, effects, keyboards and drums Zappa used to make his music. Where possible Ekers has included a footnote detailing which album or song each instrument or piece of equipment was used on. A nice touch and a very useful addition to the text.

Pride of place on the cover goes to two of Frank’s most famous guitars: The Baby Snakes Gibson SG and cherry sunburst Gibson Les Paul. Both instruments have a fascinating backstory, especially the highly modified SG which was built/restored by a fan and sold to Frank at a concert in Phoenix, Arizona. The Les Paul is instantly recognisable from the Shut Up ‘n Play Yer Guitar box set and it was FZ's main guitar in the early 80s. Unlike the bespoke SG it was bought new, off the shelf from a Los Angeles guitar chain store, but like so many of Frank’s instruments it underwent serious modification.

When it came to his guitars, Zappa cared little for originality or collectability. Despite numerous pick-up changes and electronic modifications the Les Paul survived relatively unscathed cosmetically. But earlier, more valuable, instruments were hacked, carved, routed and mutilated to give FZ the sounds he was looking for. I’m thinking specifically here of Frank’s 1960 Gibson ES-5 Switchmaster, an extremely rare and valuable instrument which was used on Freak Out and the other early Mothers’ Verve albums. But you’ll have to read the book to find out what fate befell that particular guitar.

The guitar chapters will undoubtedly be the most eagerly read part of the book, but I enjoyed it all. From Frank’s impressive collection of vintage Marshall amplifiers, to his infamous and (at the time) controversial Synclavier, via a Hammond B3, Moogs, Minimoogs, Fender Rhodes electric piano and even a kazoo(!) (the latter was heard on The Lost Episodes album, in case you were wondering), it’s all grist to the Zappa mill. Mick Ekers has done a sterling job pulling all this information together and the presentation is excellent throughout, featuring over 180 unique photographs taken by the author at the UMRK. Also included are interviews and quotes from pivotal Zappa band musicians such as Arthur Barrow, Tommy Mars and Ruth Underwood.

Unsurprisingly, Zappa Gear won’t sell nearly as many copies as Beatles Gear or Rolling Stones Gear, (pretty much like Frank’s records, in fact) but it is essential reading for even the most casual Zappa aficionado and deserves a place on every rock fan’s bookshelf.